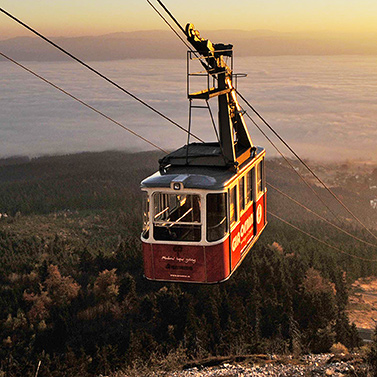 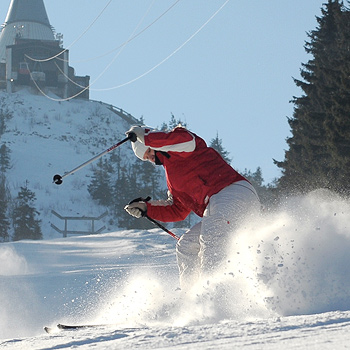 The history of the building as it stands now on the peak began in the year 1966 – three years after the first hotel on Ještěd had burnt down. The architectural tender originally required the construction of two buildings, “a television tower with a restaurant and a small hotel”, and so it is amusing that the winner of the tender turned out to be the architect Karel Hubáček (from the firm of SIAL Liberec), who actually breached the conditions of the tender with his design for a single building. His project created a simply unique mountain skyline, and was unanimously approved. 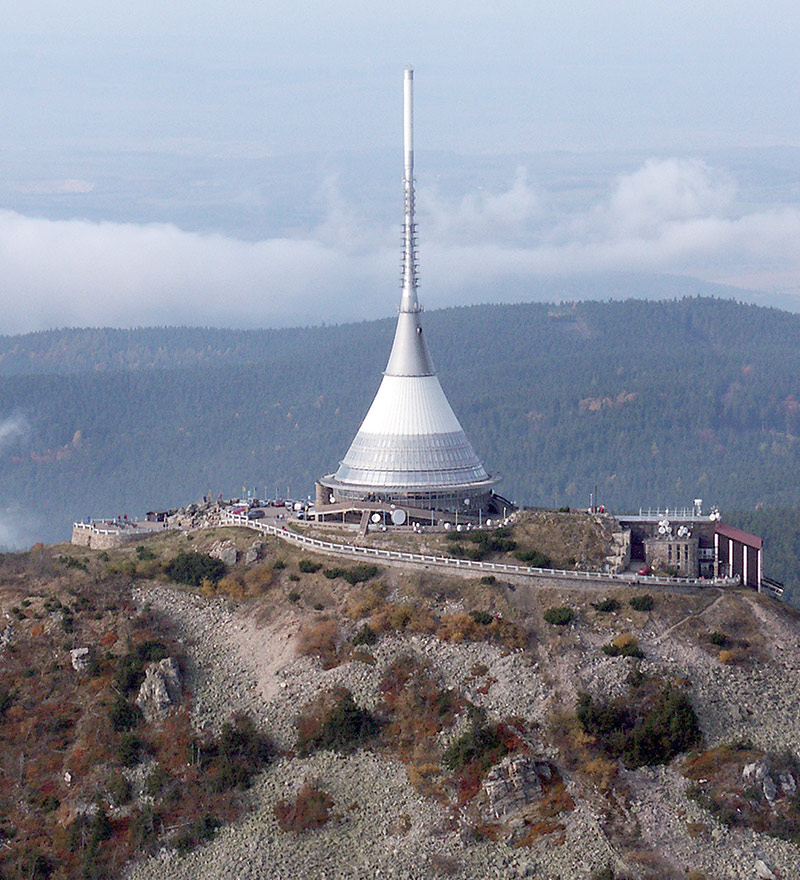 Doc. Ing. arch. Karel Hubáček, dr.h.c.1 is not, however, the only person responsible for this unusual work. The stress- analysis work was done by Zdeněk Patrman and the interior designed by Otakar Binar, who made extensive use of glasswork as a testimonial to the traditional commodity of this region.

The foundation stone was laid with great ceremony on 30th July 1966, and the construction work was performed by the Liberec company Pozemní stavby (site engineer Oto Friml, succeeded by Jaroslav Zapadlík). This unusual building also called for unusual building techniques, some of which were put into practice for the first time here. In order to place the antennae inside the building it was necessary to develop a special laminate casing; the only company willing to make a 12-metre-long post from man-made materials was a factory making fishing-rods (and because of this post the hole into the fabric had to be widened, as it was too small), etc.

This bold project has caught the attention of architects not only from this region, but has also found ahost of professional admirers abroad, and in 1969 it was rightly awarded the prestigious Perret Award. The prize was awarded in Buenos Aires, although the man behind the design was unable to attend for political reasons.

This modern landmark of Ještěd was opened to great celebration on 21st September 1973. It measures an impressive 94 metres from the foot to the tip of the antenna, its odd shape is technically described as “rotational hyperboloid” and it was designed to take account of the truly extreme climatic conditions at the top. On the lower of the two floors there is the machine-room, technical equipment and operations room. Above these there is the look-out terrace, a buffet, restaurant with cafe and a hotel. The upper part houses the communications technology, with the top comprising a tubular extension on the top of which is placed a 17-metre-long antenna.

There were some dramatic moments once it was completed, when the building has swayed in the strong winds and threatened the destruction of the tower. The constructors resolved this tricky situation by adding a 600 kg ballast weight and a vibration damper. With this kind of load any such high jinks are out of the question and Ještěd has led an unblemished life up to the present day.

The building of the Ještěd hotel is a unique symbol, not only of Liberec, but of the whole of the Liberec region. No matter where you are in the town it literally follows your every step, and its characteristic shape means that it can’t be missed, even at a good distance. Therefore it is no wonder that the logos of many companies in the town include the Ještěd cross – beginning with the Municipal Council of Liberec through to the symbol of the Region of Liberec.

In 2013 the Ještěd mountain hotel celebrated its 40th anniversary (1973) and despite its youth, this keen collector has already swept up a host of awards and well-deserved titles: National Monument to Engineering, Building of the 20th Century, International Perret Award for Architecture, and is now trying to join the ranks of the “elite” – as a Unesco monument.

The people of Liberec are naturally proud of their landmarks. They have shown their respect, for example, by organising public collections to raise funds to have the building permanently illuminated at night. It is thanks to the interest shown by ordinary people, institutions, schools, companies, as well as the surrounding villages that they managed to scrape together the required sum of 750 000 CZK and since 5th September 2001 the Ještěd skyline is lit up at night like a weird spaceship hanging motionless in the sky above the lights from a metropolis of a hundred thousand people far below it.

Although Liberec is known under many nicknames – town of rhododendrons, town of sports, etc. – it is still most frequently referred to by the more fitting term: “town below Ještěd”.