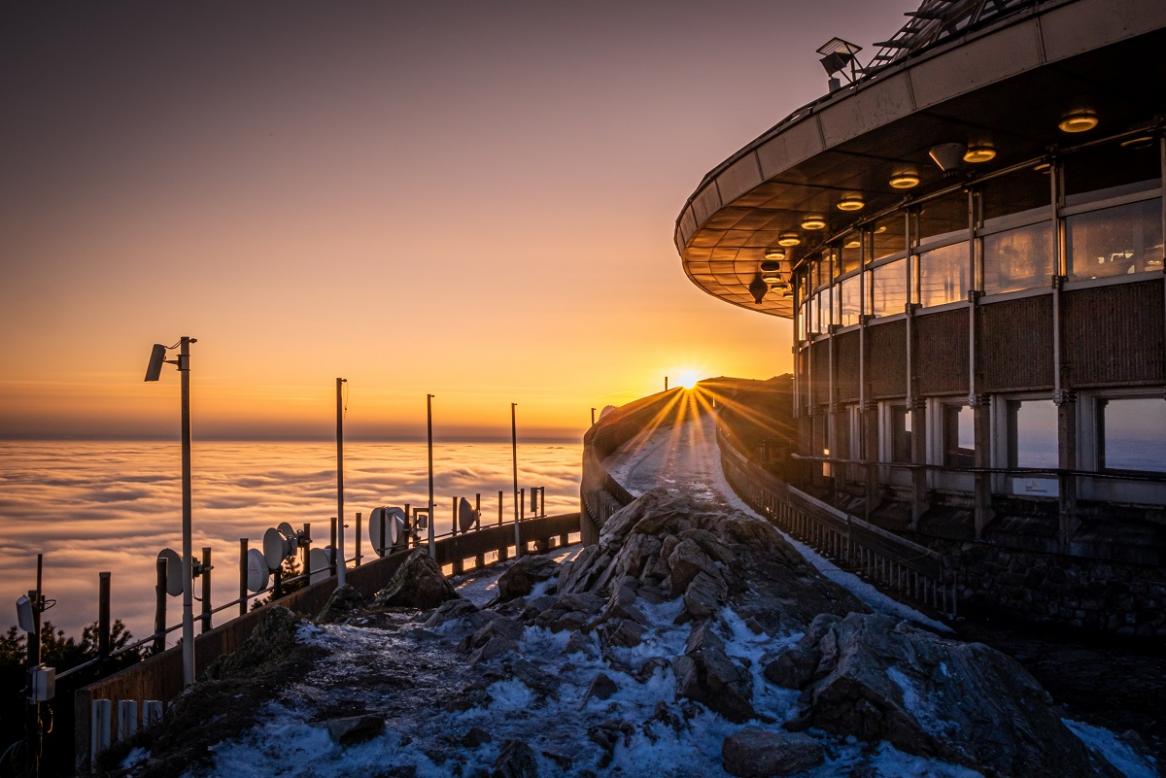 Kubajsz.com
>
Those who come to Liberec must go to Ještěd. We will suggest some options and it will be up to you to decide whether you’ll just climb to the top or keep going and extend your trip a little longer.

What to see:
At the tram terminal, you can choose whether to climb straight to the top (that is, under the cable car – but beware this is only possible in warmer months, as this area turns into a ski slope in winter), or follow the blue marker to the right of the tramway, which leads you up through the woods along a small detour.

Blue is Good, as the Czech song says, so if you follow it with confidence, it will take you safely all the way to the Nad Výpřeží crossroads, where the red path also joins in. Those who don´t mind a short detour can keep going straight along this single red path through the forest, and in less than 2 km find the Cairn for Airmen – a memorial to a tragic crash in 1948, when a smaller aircraft crashed into the Ještěd hillside leaving five people dead in its wreckage.

For those who just cannot wait to get to Ještěd, stick to the joined blue and red path to the Ještěd – Odbočka k Vrcholu (to the top) crossroads, where they can leave the marked routes, and keep going straight on a well-travelled narrow path, which will take them to the top of Ješted in no time.

Ještěd, the Little Martian, the Rohan Stone, the cross on Ještěd – all of this awaits you at the top as a reward for your endurance. And the cable car, of course. You can take the oldest operating cable car back to Liberec, or continue your journey further.

If you choose the second option, then stick to the red markers along the road where you can keep enjoying views of the countryside until you reach the Ještědka cottage. The red leads you further along the ridge past the upper station of the Černý Vrch chair lift, then the Skalka chair lift, to the Pláně pod Ještědem cottage. You have covered approximately 6 kilometres by now, and in front of you is a popular restaurant, where, besides refreshments, you can also find a museum dedicated to Mountain Rescue teams.

What next? The time to decide which way to go has come again.

1) The blue route to Horní Hanychov will take you back to where you started (another 2.5 km).

2) The ridge route continues to the Rašovka restaurant and lookout tower and then down the road to Šimonovice to the public bus stop, from which buses no. 20 and no. 60 run back to the Liberec city centre (another 7 km).

3) The ridge route past the Rašovka restaurant and lookout tower, and further to Javorník Hill, where you will find the popular Obří Sud (Giant Barrel) Restaurant, a bobsled track and a chair lift (ca. 10 km). Near the lower station of the chair lift is located the Dlouhý Most - Javorník intercity bus stop, from which connections run to Liberec, and there is also the Jeřmanice railway station a little bit further.

We hope you have enjoyed our ridge trail and Ještěd made a good impression on you. Your next expedition can, for a change, head to the opposite side of Liberec, where the peaks of the Jizera Mountains provide a similar challenge.