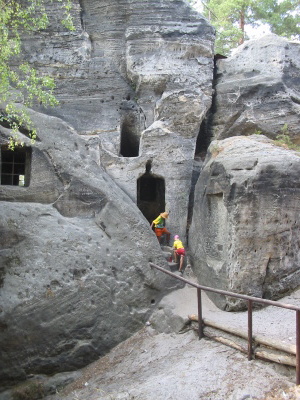 Samuelova Cave
The man-made cave carved in the rock tower above the Dobranovský Potok is just opposite Sloup Castle. It was dug in 1718 by a native, Samuel Görner, who lived there for 17 years and produced and cut glass for spectacles and binoculars. In 2003, the access road and the rock lookout points above the cave were renovated. They offer superb views of the surrounding area.

Velká Cikánská Jeskyně (Grand Gypsy Cave)
The huge natural formation, nearly 30 m long and 15 metres wide, is situated near the Dobranovský Potok, some 300 metres to the west from the crossroads at the Seven Dwarfs. The cave was probably inhabited in ancient times. In winter, its entrance is covered with an impressive icicle formation.

Malá Cikánská Cave (Small Gypsy Cave)
The cave is man-made, carved with arches, 16 m wide. In the past, it used to be a place of asylum and a refuge for migrant gypsies. It is situated about 200 metres to the northwest from the crossroads at the Seven Dwarfs.

Pustý Kostel (Deserted Church Cave)
The cave comprises three arches and is more than 16 metres long. It is situated some 200 m above the Lesní Divadlo (Forest Theatre), on the left, just at the road to Dvojkov. It is the remains of a former sandpit.

Brýlařská (Glassmaker Cave)
A small cave, located some 300 metres to the south from the Sloup cemetery, in the forest above the former sand quarry. The legend explaining the name of the cave says that optic glass used to be cut and produced there.

Liščí Díry (Fox Den) Cave
A cave in the rock cliff at the edge of the forest, at the entrance in the Sloupské Skály, about 300 metres to the southeast from the cemetery. The cave comprises a system of caverns, rock chimneys and passages. In the tallest chimney you can come across remnants of a ladder ended with little steps.

Švédská jeskyně (Swedish Cave)
It is situated in the left part of the Konvalinkový Důl in the Sloupské Skály. Its name is connected with local history. During the Thirty Years War, Sloup was visited by Swedish troops several times. The soldiers robbed and damaged everything they could reach. In 1648 they were extremely cruel and local people needed to save their lives and valuables. The cave was an ideal refuge as it was difficult to access. At present, there is just a little cave , 3 metres deep and 2 metres high, and steps carved in the rock, all of these accessible via a side rock chimney.

Jezevčí Díra (Badger Den)
The small cave high above the Švédská Jeskyně, on the left, under the trail named Horní Hraběcí Cesta. The entrance is decorated with a picture carved in the rock. Legend has it that a hunter died at the cave during a winter hunt. The rock offers a wonderful view of the surrounding area.