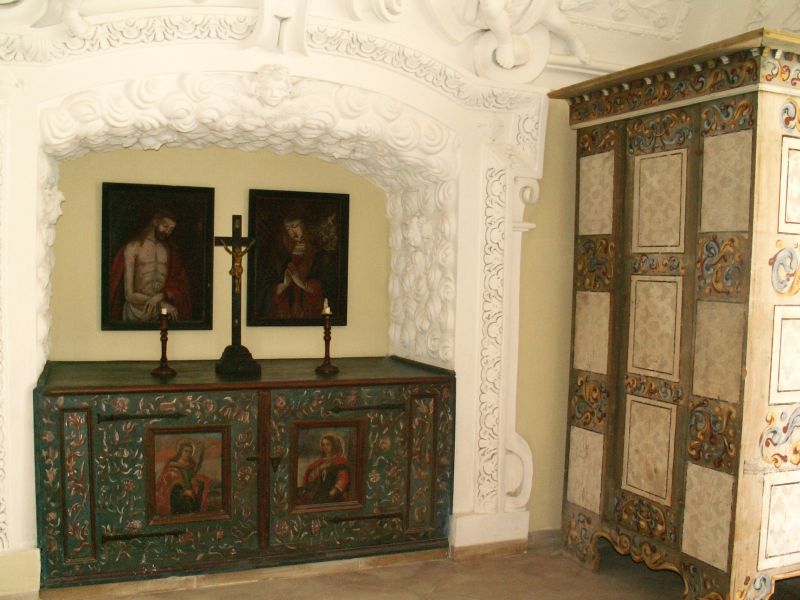 Musil
>
Lemberk was originally a frontier guard castle on the Zittau trade route. Only the cylindrical tower remains of the original structure, other parts were covered by Renaissance and Baroque reconstructions.

Lemberk chateau was created by the reconstruction of a medieval castle where St. Zdislava of Lemberk used to live. Inside the chateau, the Chapel, the Great Hall with its precious coffer ceiling and painted scenes from Aesop’s fables, the Suzerain Office with a safe from the beginning of the 19th century, and the Black Kitchen, get the most attention. Since 2010, the tour has been enriched by the Armoury and so-called Liebig Rooms, which resemble accommodation for a significant textile industrial family at the nowadays inaccessible Nový Falkenburk chateau at the turn of the 19th and 20th centuries. Occasionally, the Clam-Gallas Apartment, where visitors can see the progress of the restoration works and also the progress of furnishing the rooms with historical furniture, is opened. A Baroque garden and the so-called Zdislava Well are situated near the chateau.

This tour presents visitors with the history of the chateau. It guides them through the originally preserved Chapel of the Holy Spirit, the Black Kitchen, Suzerain Office, the Tale Hall with Renaissance coffer ceiling and other Renaissance and Baroque rooms. A significant part of Lemberk’s representative interiors is included in the first tour.

Duration of the tour: 50 minutes

The first part of the extended tour is the same as the basic one but it is extended by a tour of the Small Armoury, the Liebieg Rooms and the so-called Zdislava Room from the 17th century.

Duration of the tour: 70 minutes