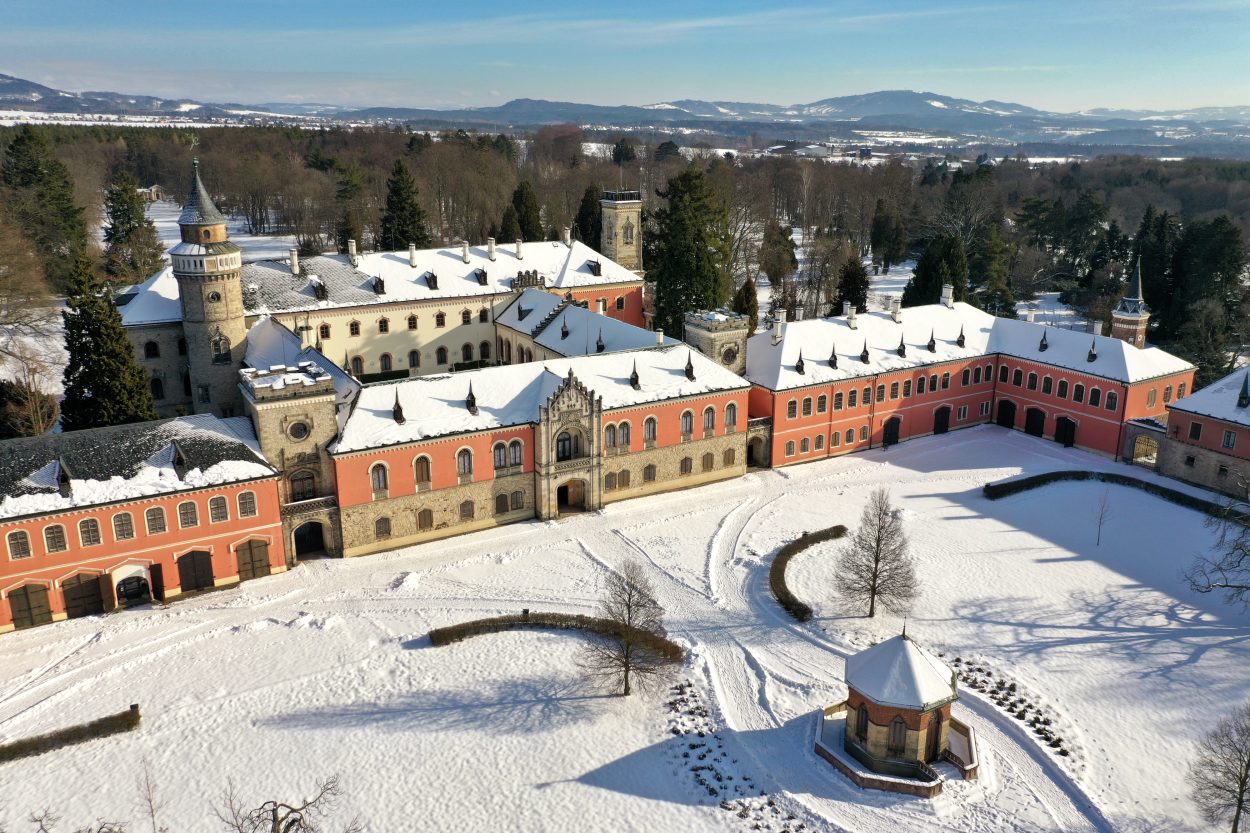 Charousek Pavel
>
The original Baroque chateau of Sychrov was renovated in the neo-classic and neo-gothic style. Its romantic look comes in particular from Josef Pruvota, royal architect.

Sychrov state chateau is one of the most visited places in our region and often sought after by film makers to make film fairy tales here. It is open to the public throughout the year.

The originally single-storey Baroque chateau later underwent Classicist and Gothic Revival reconstructions. It gained its romantic appearance mostly thanks to architect Josef Pruvot. The walls of the chateau are decorated with extremely precious oil paintings of ancestors of the Rohan family and French kings. The biggest collection of French portrait paintings, a collection of weaponry and the memorial hall of A. Dvořak are located in the chateau. Most of the rooms are also unique due to their rich carved wooden embellishments. The chambers of the chateau feature original furniture, paintings and other accessories.

Exhibitions and other events, for example, night tours, are regularly held at Sychrov. Also the larger English park, where you can see attractive spectacles of free flying raptors accompanied by expert commentary by a professional falconer on the history and present of falconry in our country and around the world, is worth a visit.

Tour of the interiors of the main building of the chateau (e.g., the Chapel, Staircase Hall, Guest Rooms, Apartment for gentlemen and Apartment for ladies, Library, Billiards Room, Large Dining Room.

Duration of the tour 70 minutes.

It features jewellery and sculptures made of precious metals and stones which were given to the Czech Republic by Mr. František Khynl, native of Turnov.

The Quest to the Treasure of a Bear Clan

A game for children in the chateau’s park. The task for the children is to go through the park following the clues in the game plan and obtain information leading to the treasure that is hidden somewhere in the castle grounds. After completing the tasks and unveiling the secret code to the treasure chest, each seeker will receive a share of the treasure.

Gallery for the game The Quest to the Treasure of a Bear Clan.

Tour with a princess – Route D

Duration of the tour 30 minutes.

The exhibition at the Sychrov chateau, focusing mainly on inventions and inventors of the 19th and 20th centuries, is located on the premises of the former stables. The exhibition is divided into three parts – “Old Town”, “New Town” and “Patent Office”.

Fairy-tale tours (ongoing throughout the season)

unconventional tours of the chateau interiors – fairy-tales performed by guides in costumes, scenes of the fairy-tale take place in individual chambers

Celebrations of fire and hunting (July)

period marketplace, demonstrations of traditional product making and their sale, and accompanying fencing and theatrical performances

Interesting fact: Several fairy-tales have been filmed at the Sychrov chateau, the most well-known being “Zlatovláska” and “Nesmrtelná teta”.

It is possible to organize a wedding ceremony at the chateau – civil ceremony in the Ceremonial Hall, church wedding in the Chapel. There is also the option to organize a medieval feast or ride through the park.